Are developers now off the hook? 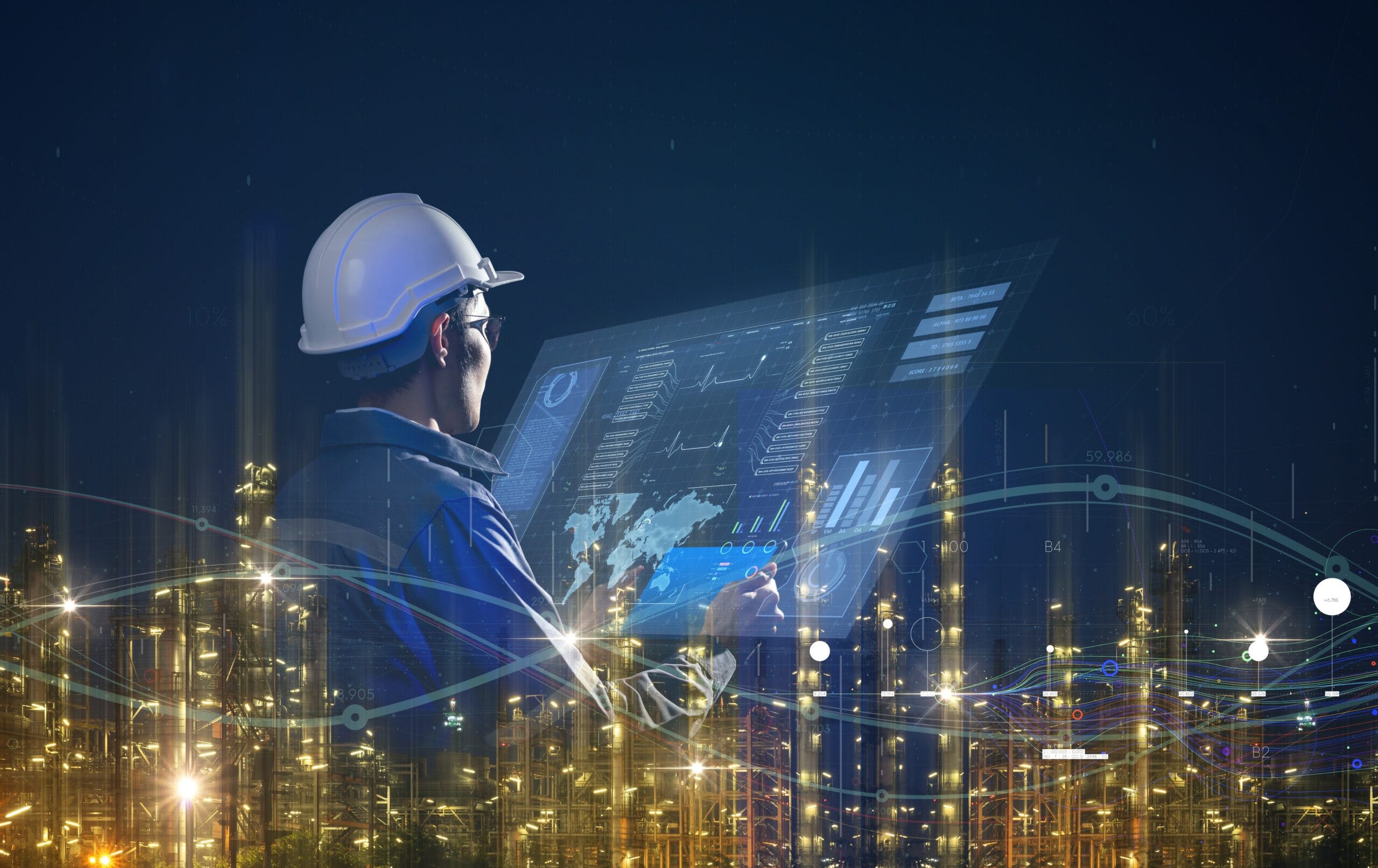 Monitoring head contractors’ trusts responsibilities now rest with the QBCC. Principals are off the hook!

Since the implementation of the  Building Industry Fairness (Security of Payment) Act 2017 (BIF Act), there have been two very distinct trust models for securing monies owed to subcontractors. The original model established a framework for project bank accounts for both government and private sector building and construction projects. Project bank accounts were trust accounts where progress payments, retention monies and disputed funds were to be held in trust for subcontractors.

I am not going into much detail about how project bank accounts operated because they have now been superseded by a profoundly different trusts framework.

I will point out that the head contractor was previously required to establish three bank accounts for each project, being:

The principal was required to:

In a report by a panel appointed by the government to evaluate the effectiveness of the BIF Act, a statement from a submission by the Property Council is quoted:

“The Act uses ‘the Principal’ as a quasi policing authority over the PBA model, with responsibilities to check that the Head Contractor is complying with the Act and report discrepancies to the QBCC. These significant legal obligations are both impractical and unreasonable.”

The QBCC has stepped in to replace the principal in this oversight role.

In Explanatory Notes supporting amendments to the BIF Act, it is stated: 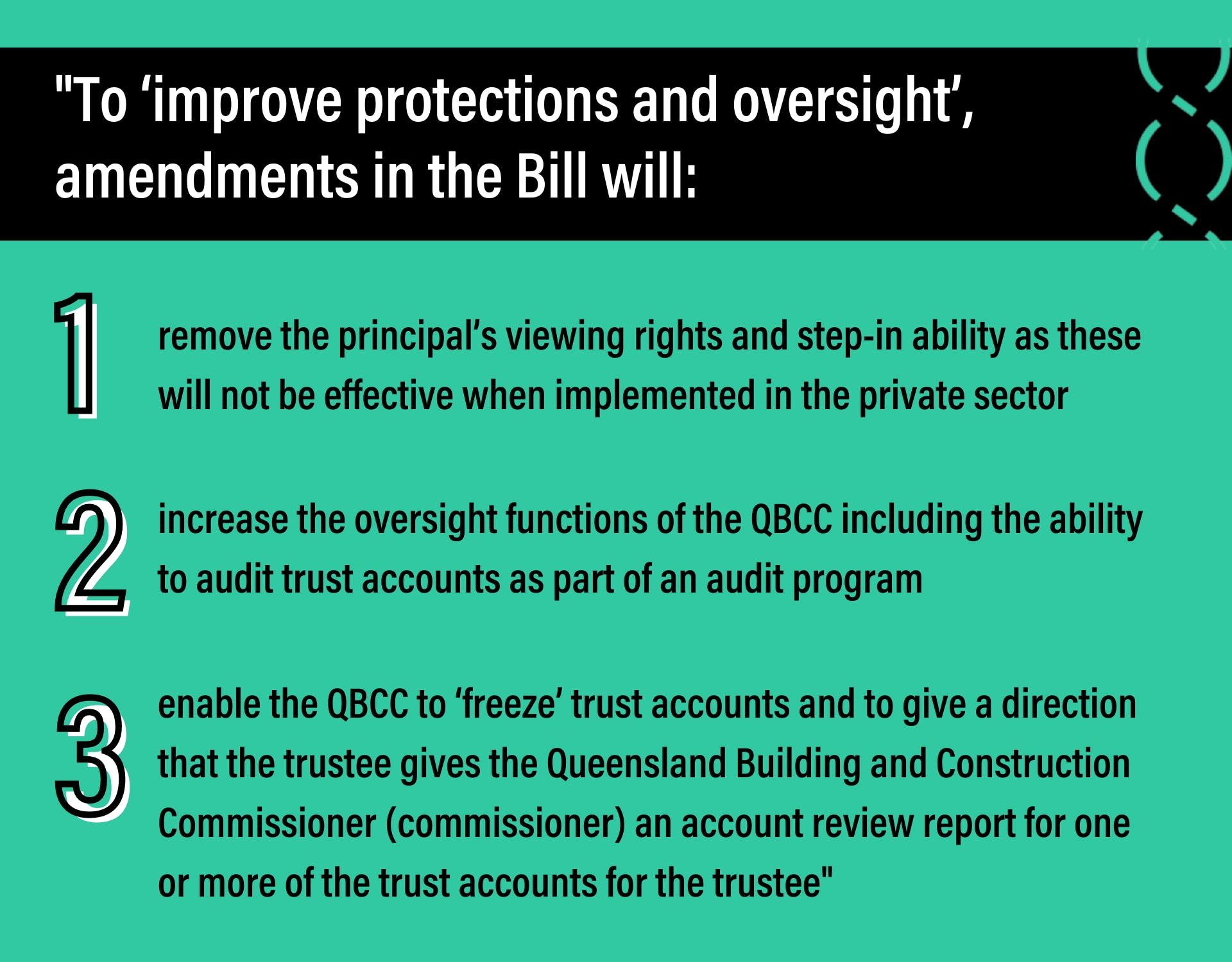 In introducing these BIF Act amendments on 5 February 2020, the responsible  Minister stated:

“I now turn to that will create an oversight function for the Queensland Building and Construction Commission over project trust accounts. The panel provided  amendments to improve transparency and to give the commission the oversight it needs to detect financial mismanagement and other instances of noncompliance.

The commission will have the powers to ask gatekeepers of information about trust accounts to hand them over in cases of noncompliance.

Clause 78 of the bill establishes an approved audit program which the commission can use to check for compliance with the BIF act—not just the trust account requirements but progress  payment and adjudication matters as well.

A person who has been asked to supply documents under an audit will not be able to withhold the information on the basis that complying with the requirement might tend to incriminate them or expose them to a penalty.

Amendments in the bill will also provide the commission the powers necessary to freeze a trust account—that is, stop the trustee from withdrawing money—or to have a trust account   independently audited.

The commission can also apply to the Supreme Court for directions about how an amount in a trust account should be paid out.”

Please note this statement by the Minister in the speech:

“Clause 78 of the bill establishes an approved audit program which the commission can use to check for compliance with the BIF act—not just the trust account requirements but progress payment and adjudication matters as well.”

Did you notice this before?

“The Bill replicates several existing BIF Act offences, including the corresponding penalties. High maximum penalties were applied to the BIF Act when it was first made, and it is appropriate that these be retained. The penalties provide strong deterrence from non-compliance, enable the courts to impose more meaningful penalties, such as imprisonment, where appropriate and emphasise to industry and the community the seriousness of the offences under the legislation. New offences associated with the trust account requirements have been based on existing BIF Act offences as well as other trust legislation, including the Legal Profession Act 2007 and Agents Financial Administration Act 2014.” 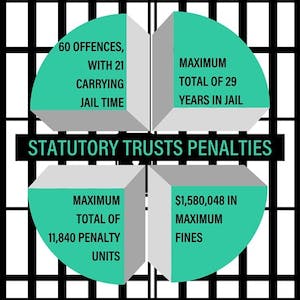 The QBCC has produced a useful trust regulatory guide which I recommend affected parties read.

Are you a QBCC licensee that will have to establish trusts?

We’ve developed a quick and easy to use tool to let you know if and when your business will be affected by the new trusts regime, give it a try.