What will building contracts look like after Project Bank Accounts (PBAs) come into effect? 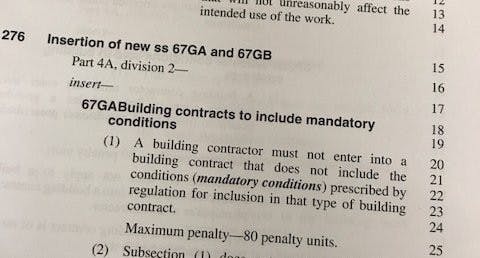 During a briefing to the Public Works and Utilities Committee reviewing the Building and Construction (Security of Payment) Bill 2017 (BIF Bill), Department officers were asked several questions that they had to take on notice and provide the committee with a written response.

In particular, one answer to a question caught my attention.

The question asked by the Committee was:

The Response from the Department was:

That answer sheds little light as to the specific contract conditions the government has in mind in this regard. However, we at Helix Legal expect that conditions like unreasonably short time bars, termination for convenience and recourse to security without notice would be the first raft of prohibited conditions.

If the implementation of PBA’s is conditional on the government having to produce regulations mandating and prohibiting contract provisions to “create a fairer and more accountable industry”, then it would appear that building contracts are about to be significantly changed and redefined by the government.

If you would like any further information in regard to this or any other BIF Bill issue, please feel free to contact Michael Chesterman at michael@helix.legal or Earl Tan at earl@helix.legal.