Project Bank Accounts will only have limited application 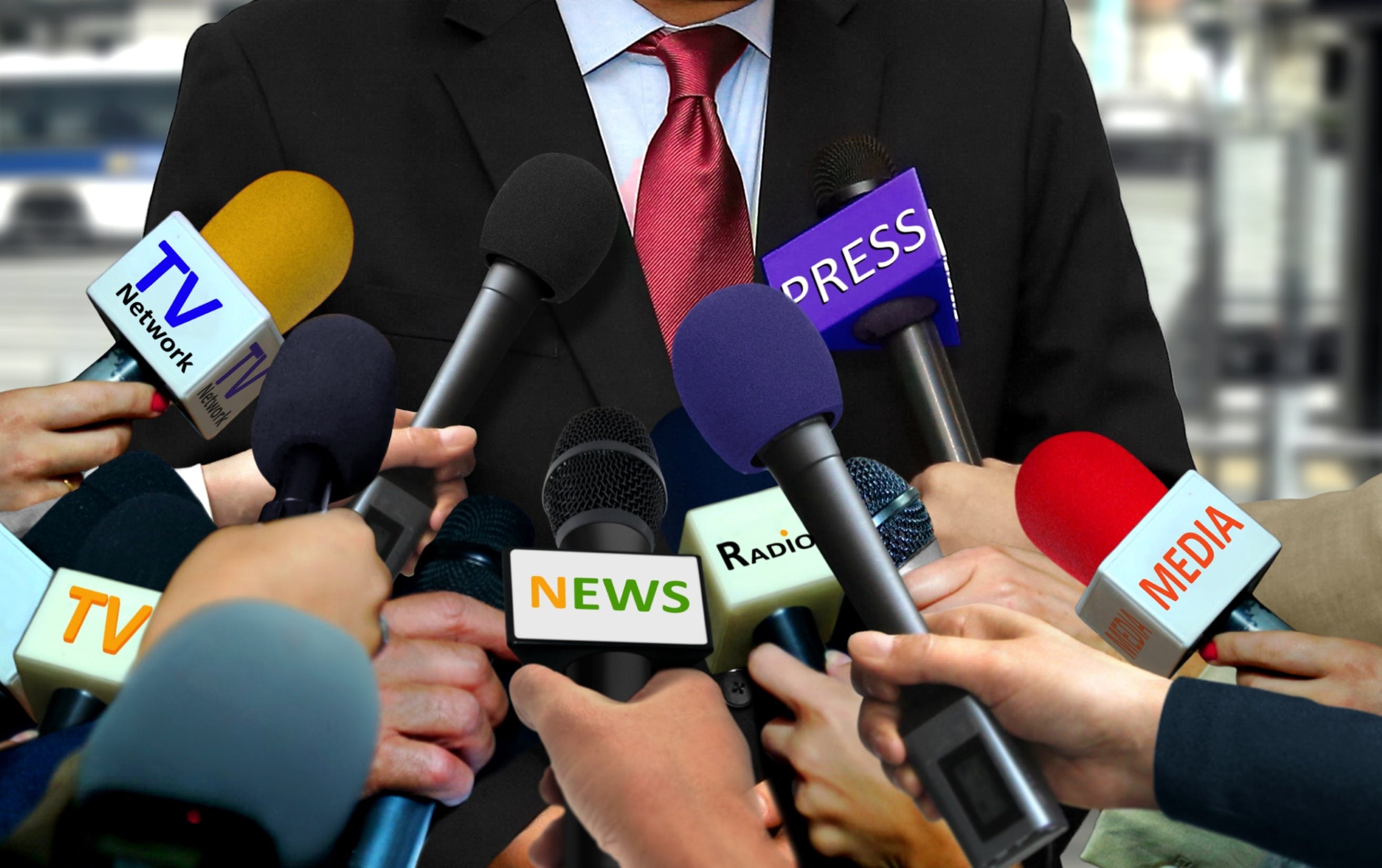 In a press release dated 28 November 2019, the government announced its response to two SOP reports, one of which was by the Building Industry Fairness Reforms Implementation and Evaluation Panel (Panel).  In the executive summary of the report it is stated:

“The Panel was appointed to undertake an evaluation of the implementation of the Building Industry Fairness (Security of Payment) Act 2017 (BIF Act). We were tasked with determining the effectiveness of the legislative framework in meeting the policy intent and identifying opportunities for improvement of security of payment outcomes.”

In the background section of the report it is stated that the construction industry:

With regard to the impact Project Bank Accounts (PBA) will have on the industry, it is stated in the report (page 25):

“Whilst a phased approach to commencement is warranted, no amount of delay to commencement will alleviate some level of the disruption. In addition, the BIF Act was passed in October 2017, some 18 months ago, and contractors have been aware that changes are coming for some time. To assess the number of projects and contractors affected by different options for timing of a phased approach, the Panel sought information from QLeave which is set out in Table 4.”

The information from Qleave reveals  that if PBA were in full effect for the 2017/2018 financial year, 2,438 new projects, valued at over $1 million, would have been subject to a PBA. A breakdown of these projects reveals:

Below are two infographics which conveys this information in an easily understood manner. 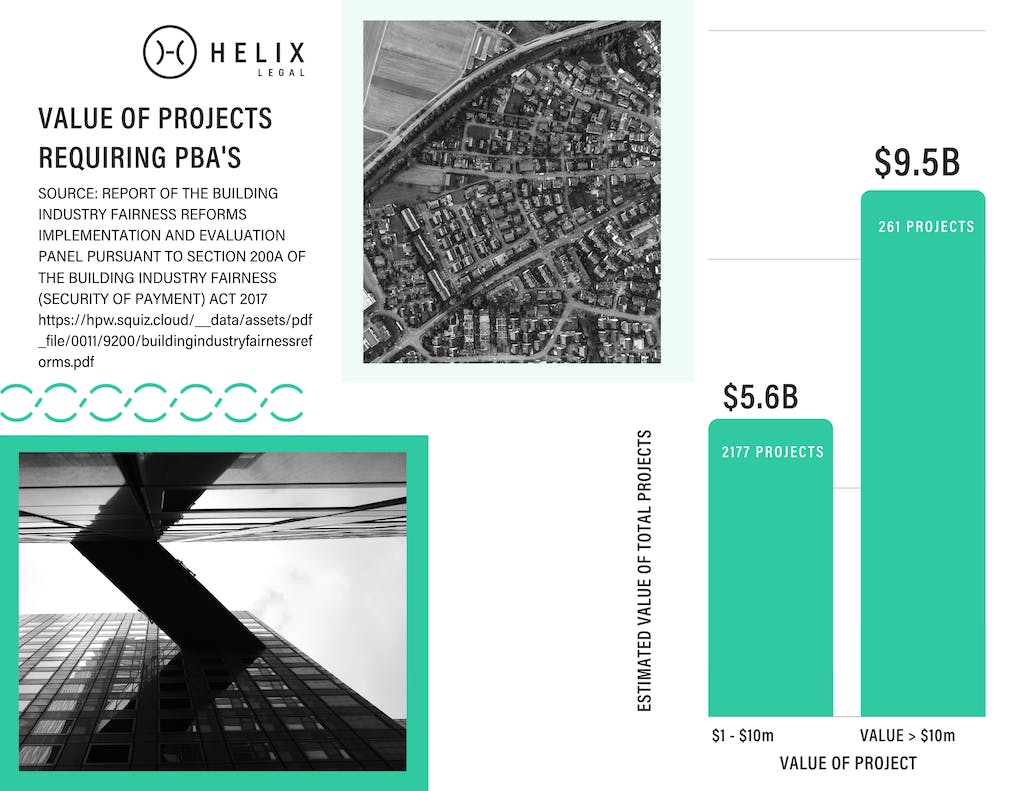 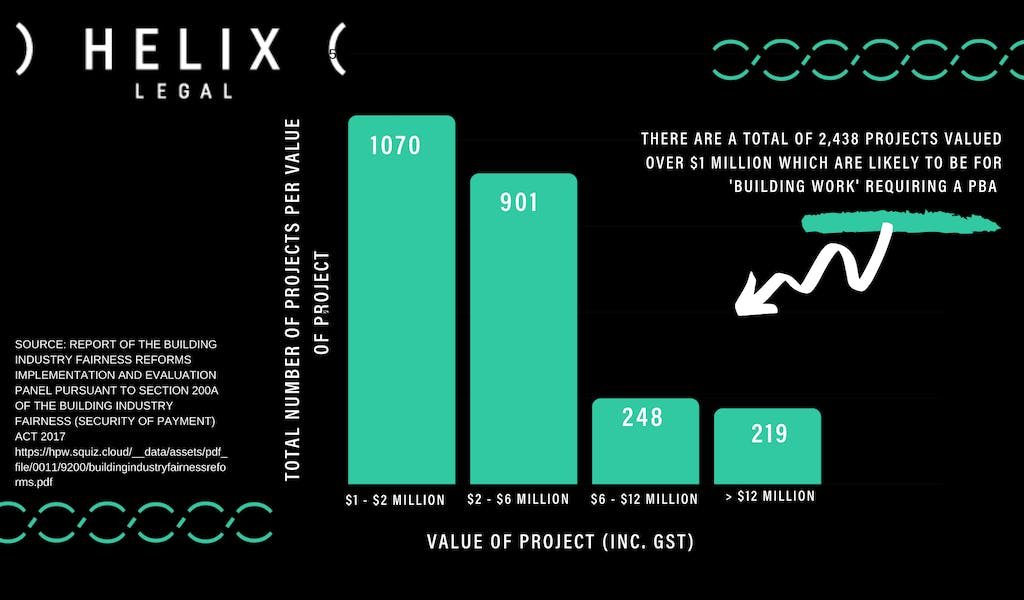 Of the $43 billion worth of construction work carried out in Queensland each year, only approximately 35% of that work ($15.1 billion) will require a PBA.

I pointed out this limited PBA application over 2 years ago

In an article I published on 27 October 2017 entitled Project bank accounts are happening but will your job have one?, I stated:

Of the $44 billionof building and construction work done in Queensland as noted by the Minister, only a third of that money will be protected by PBAs.

From a subcontractors perspective, the challenge for them will be in understanding if they will be getting paid through a PBA.

Given complexities regarding whether or not a Project will be covered by a PBA, educating the industry about its operation and application will be crucial to the successful implementation of the new PBA system”

I am presently working my way through the report by the Panel and will be publishing further articles relating to the impact on the industry of the proposed roll out of PBA.

However, one thing I have noted is the poor feedback the Panel received from subcontractors who were beneficiaries under the government trail of PBA.  In the report it is stated:

“The Panel obtained only limited feedback from subcontractors that are beneficiaries under Phase 1 PBA projects. The Panel gathered a list of contact details for approximately 200 subcontractors from the notifications lodged with the principals under section 50 of the BIF Act as at the end of October 2018. That group of 200 were invited to provide comment to the Panel. In total, the Panel received feedback from seven subcontractors who were beneficiaries under a PBA. Three responded to the Panel’s questionnaire, two attended industry forums or the subcontractor session and two provided written submissions.”

I am both confused and disappointed with this outcome. PBA are the central plank of the governments SOP reforms. I would have thought that as beneficiaries, these 200 subcontractors would have been keen to provide invaluable feedback to the Panel.

There will be significant PBA amendments to BIFA so industry participants will need to stay tuned to developments.  We at Helix Legal are committed to keeping the industry informed on this significant issue.

If you would like any advice or assistance in relation to the potential impact PBA may have on your business, please feel free to contact me at michael@helix.legal.