Protection of subcontractor’s cash retentions is still an illusion.

In an article published on 23 August 2018  entitled RIP Statutory Construction Retention Bond/Trust Scheme, I pointed out that the SOP reform process commenced with the release of a discussion paper on 21 December 2012 entitled ‘Payment dispute resolution in the Queensland building and construction industry’. This discussion paper posed several questions, one of which was:

“Question 12: Is security of payment an issue for retentions? If so how do you think this could be improved?”

This SOP reform process has just concluded with the passing of the Building Industry Fairness (Security of Payment) and other Legislation amendment Bill 2020, with further amendments, by parliament on 15 July 2020.

In an article published on 15 July 2020 entitled QLD commits to trusts for solving SOP issues but no confirmed timeframe, I pointed out that the above Bill establishes two new types of statutory trusts, namely project trusts and retention trusts to protect monies owed by head contractors to subcontractors.

I further pointed out in this article that in reading the Bill a second time, the responsible Minster indicated an intention to finalise, in stages, implementation of this regime by 1 January 2023.

However, the Bill does not contain a legislative committed timeframe for the implementation of statutory trusts.

In other words, there may be changes.

The significance of this is that a decade after the government initially engaged with the industry on this major industry issue, subcontractors may have some form of protection of their cash retentions for eligible building contracts, whether government or private, of $1 million or more.

These reforms were overly elaborate regarding trusts.

That is my view in terms of the initial development of Project Bank Accounts as a key SOP initiative to address in part, the issue of subcontractors unjustly losing cash retentions.

I believe that the single most important thing which can deliver substantial SOP improvements for subcontractors is the effective protection of cash retentions.

In my view, addressing this industry scourge should have been the primary focus in developing appropriate legislation.

It has been my experience in the construction industry for over 25 years that the misuse of cash retentions by head contractors is the major SOP issue that has always confronted subcontractors.

This has been a well-documented problem for a long time and well expressed in a QBCC discussion entitled Better Payments Outcomes (released 28 October 2014), where it is stated:

“The two main concerns with cash retentions are:

Despite these moneys belonging to the subcontractor, it is asserted that a significant number of subcontractors are not receiving their retention moneys when they become entitled to them under the construction contract.

It has been suggested that the reason retention moneys are not always returned is because head contractors use the retention moneys as part of their working capital rather than holding onto the funds to provide for incomplete or defective work. It should also be noted that during consideration of these issues, it was raised that disputes can be ‘manufactured’ about incomplete or defective work, allowing head contractors to delay or refuse payment.

The recovery of retention money remains a concern because upon the insolvency of a head contractor, retention moneys are available to administrators or liquidators and may be included in the asset pool available to be distributed to creditors. A subcontractor will have little prospect in recovering these retention moneys, which are rightfully theirs, as they are considered to be an unsecured creditor.”

My solution. A Statutory Retentions Scheme.

In an article published on 23 August 2018, I embraced the idea that the most efficient and effective way to prevent the misuse of cash retentions is to require all such funds be held in a statutory scheme.

“Such a statutory scheme would operate along the same lines as the Residential Tenancies Authority does in relation to protecting the misuse by landlords of rental bonds paid by tenants when entering into accommodation leasing arrangements.”

As I outline in this article, such a scheme was considered in initial stages in the development of the most recent SOP reforms, but ultimately not adopted.

How would such a scheme operate?

In developing this scheme, I have made several assumptions (outlined below), that must be tested by expert modelling on the costs to implement and maintain such a scheme, and different scenarios in respect of investment options and outcomes.

Now is not the time for such a scheme to be introduced.

In this current COVID-19 induced recession, now is certainly not the time to implement such a major reform.  Now is the time to prepare to BUILD BACK BETTER.

However, now is the time to model such a scheme.

The QBCC is an independent statutory authority so, in a financial sense, it operates from revenue generated through a general statutory fund and insurance fund. In other words, the QBCC normally cannot rely on monies coming from the consolidated revenue of the government to fund significant initiatives such as this one.

However, I have recently noted in a report by the Auditor General into the QBCC, in respect to the QBCC  becoming an insights-driven regulator, an initiative I strongly support, the allocation of consolidated revenue to support this very important initiative for the future of the regulator. To my mind, this is an initiative of similar merit and worthy of investment for the future. 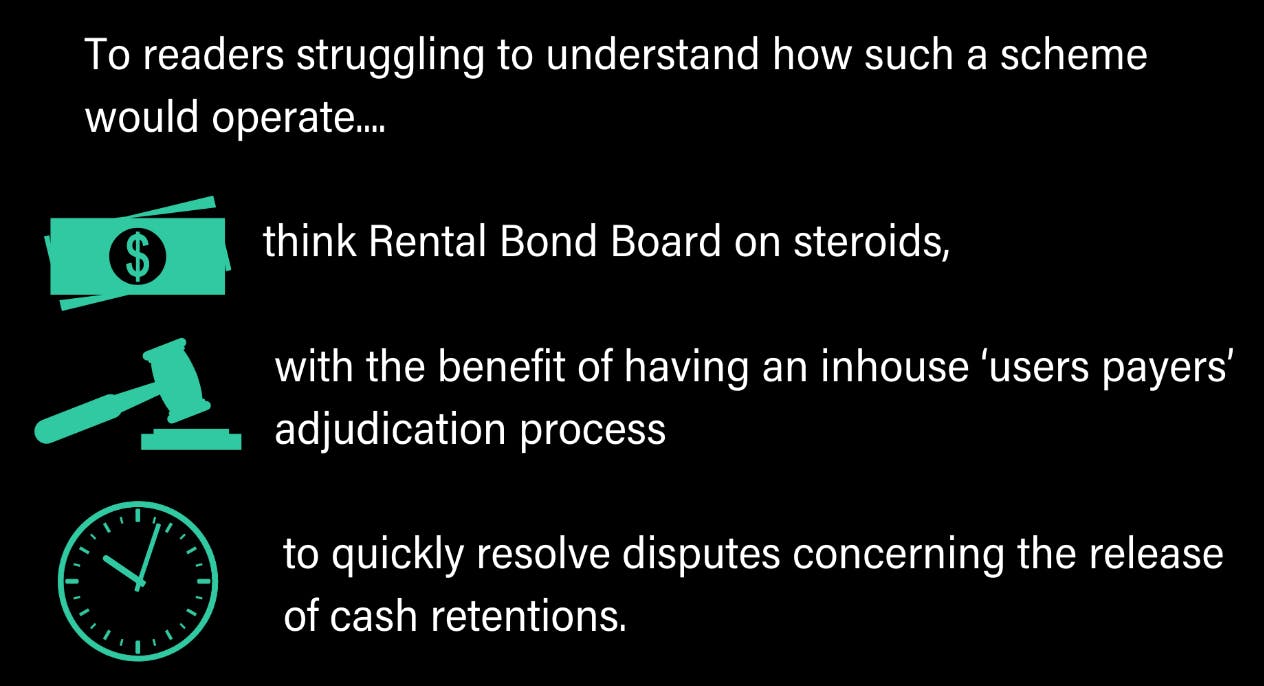 We need to BUILD BACK from this pandemic BETTER than we did before.  In my mind, this is a good place to start.

I welcome, as always, the comments of much smarter people than me that have an idea of their own to share. My motivation in writing these articles is to get people thinking about significant industry issues such as this one.