SOP ideas for building back better.

As my CV demonstrates, I have a lot of skin in the game when it comes to the introduction of SOP legislation in Queensland. Four years of researching, developing, and implementing SOP initiatives and then thirteen years as the inaugural Adjudication Registrar, represents 30% of my working life. I am a strong advocate for contractors carrying out construction work having access to adjudication for improved payment outcomes.

In February 2020, I published an article entitled “Adjudication is simply the best”, where I outlined reasons why, in my opinion, adjudication is the best dispute resolution process for resolving payment disputes. I still firmly believe this to be true.

The Helix team are experts in adjudication and understand that engaging a legal team to assist in payment disputes is a considered commercial decision. So, we reduce the complexity by giving you all the information up front – including the price. If you need support in a payment dispute, we offer the opportunity for you to get a fixed price for claims under $750K. We did this because we own a business too and we know the importance of knowing if you are going to spend $350K to recover $250K. Find out more here.

In Australia, there are eight state and territory SOP Acts which have one common objective, namely, to improve payment practices within the construction industry and enhance cash flow outcomes for parties.

Sadly, that is where any legislative uniformity ceases. This is to the great detriment of contractors operating across various state or territory borders. The growth of vastly different SOP legislation throughout Australia has resulted in these contractors having to develop and implement distinct contract administration processes. Click here to view an interactive version of the map below to be taken to the relevant SOP legislation for each jurisdiction in Australia. 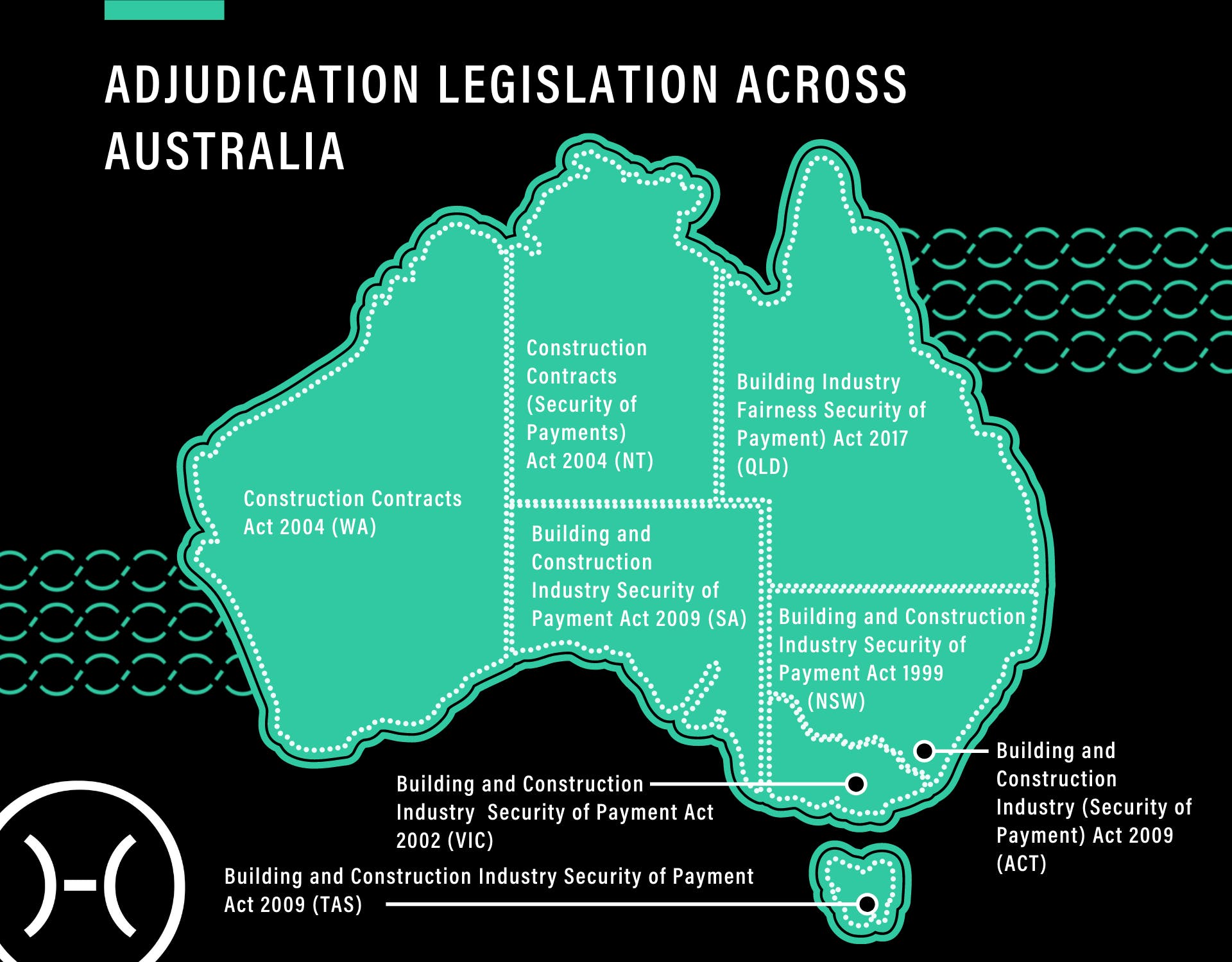 2021 will be a challenging enough year for contractors to firstly survive and then hopefully flourish, without them having to deal with increasing and divergent SOP legislation.

This is, very reluctantly, my view.

If there is one thing that the various states and territories health response to COVID-19 has revealed, it is that each jurisdiction has jealously relied on their powers to determine how to best keep their people safe and healthy. Furthermore, in certain situations, they have adopted very different strategies and guidelines. For example, look at how they have very different views on what constitutes a COVID-19 ‘hot spot’ when closing their borders. Unfortunately, the Federal government has been unable to influence the states and territories to agree to a national standard on hotspots.

However, through the formation of a national cabinet process, there has been a lot of agreement between the states and territories on other key COVID-19 related health measures. This goes to show that when state and territory governments come to the table in good faith, it might be possible for some consensus positions to be adopted.

Regarding the construction industry, each state and territory is responsible for regulating the industry within their borders. When it comes to SOP legislation, the reality is that they have adopted increasingly diverse approaches.

We have seen the apparent harmonisation of work health and safety laws across most of Australia in 2011, only to see some jurisdictions introduce variations to the model laws that were adopted as part of the harmonisation.  This is inevitable with each state and territory still having control over the laws in their jurisdiction.  It will only be a matter of time before a series of small variations end up leading to laws that are no longer achieving the harmonisation that was once intended.

I applaud the efforts of well-intentioned and committed persons over the past couple of decades who have argued and agitated for a national, harmonised SOP legislative outcome. However, I am a realist and I just cannot see it happening because all jurisdictions now have well-entrenched legislation. Each jurisdiction has reviewed their legislation since enactment (some several times) and in a few instances, extensive legislative amendments have been made.

Even if each state and territory did agree on harmonised SOP legislation, there is still another hurdle – the court system.  The courts in each state and territory are not required to follow decisions of the courts in the other states and territories.  This means that there is no guarantee that harmonised SOP legislation would give industry participants any greater confidence in the outcome of their claims.

We have already seen examples of conflicting interpretations of identical SOP provisions between states.

Quite memorably for many in the construction law field, in 2015 the two cases of Lewence Construction Pty Ltd v Southern Han Breakfast Point Pty Ltd [2015] NSWCA 288 and Hallmarc Construction Pty Ltd v Saville & Anor [2015] VSCA 318 were decided within 3 months of each other.  In these cases, the NSW and Victorian Courts of Appeal had contrasting interpretations of the application of the principle regarding the requirement for a reference date to arise in order for an adjudicator to have jurisdiction to make a decision.  Up until this time, the law was relatively settled across most jurisdictions operating under the East Coast model as to whether or not the existence of a reference date is a matter of jurisdictional fact.

We could go into deep debate about whether one of these decisions was incorrect and inconsistent with precedent, but this just goes to show that even with identical provisions courts in different states can (and will) come to different decisions in relation to the application of legislation.

On 21 December 2016, the Federal Government announced a review of the SOP systems in all states and territories to identify areas of legislative best practice to improve consistency and the level of payment protection afforded to construction industry participants. The review was conducted by Mr John Murray AM.

In December 2017, Mr Murray presented to the government with a comprehensive, 346-page final report consisting of 86 recommendations for the enactment of a nationally consistent set of security of payment laws.

The report was initially referred to the Building Ministers Forum (BMF) which oversees policy and regulatory issues affecting Australia’s building and construction industries.

The BMF is made up of the Australian Government and state and territory government ministers with responsibility for building and construction. According to the BMF website ‘Responsibility for this project has now transferred to the Department of Industry, Innovation and Science which provides secretariat support to the BMF.’

I have not been able to identify any further public record update on the status of this project. However, it would appear not to be a priority given the report is now over 3 years old.

Furthermore, I believe that the SOP legislative differences are so great that there is no prospect of all the states and territories agreeing to a harmonised SOP regime as recommended by Mr Murray. For example, Mr Murrays number 1 recommendation is:

“Security of payment legislation should seek to promote prompt payment so as to maintain a contractor’s cash flow. Such an outcome is more effectively achieved through adoption of a legislative regime broadly based on the East Coast Model”.

This in effect means that Western Australia and the Northern Territory would have to agree to abandon their long-established, and in their eyes, effective West Coast Model that operates on a very different basis to the East Coast Model.

Unless each of the states and territories pass their powers in relation to SOP onto the federal government so that legislation can be enacted at a federal level – similar to what we saw with the laws regulating companies and the ultimate enactment of the federal Corporations Act 2001 (Cth) – any harmonisation across states will unlikely remain that way.

If not harmonised SOP legislation, can anything be done to reduce differences?

However, I believe that we should accept the reality that there are two distinct and well-established SOP models in Australia.

Western Australia and the Northern Territory should not be pressured to adopt a harmonised East Coast Model along the lines as recommended by Mr Murray. Aside from a difference in the time for making an adjudication application, the Western Australian and Northern Territory Acts are the same. These two adjoining jurisdictions can quite rightly claim that they have largely achieved harmonised West Coast Model SOP legislation.

However, compare this to the situation with the six jurisdictions that have embraced the SOP East Coast Model. In addition to the earlier mentioned Victorian excluded claimable amounts, many additional legislative differences exist between the various Acts that have been developed under this model.

I do not intend to identify all the East Coast Model legislative differences, but Mr Murray addresses this matter in great detail in his report under section 4.3.

However, just in terms of only NSW and QLD, the two below infographics outline the key elements of their legislation, with the differences easily identifiable. 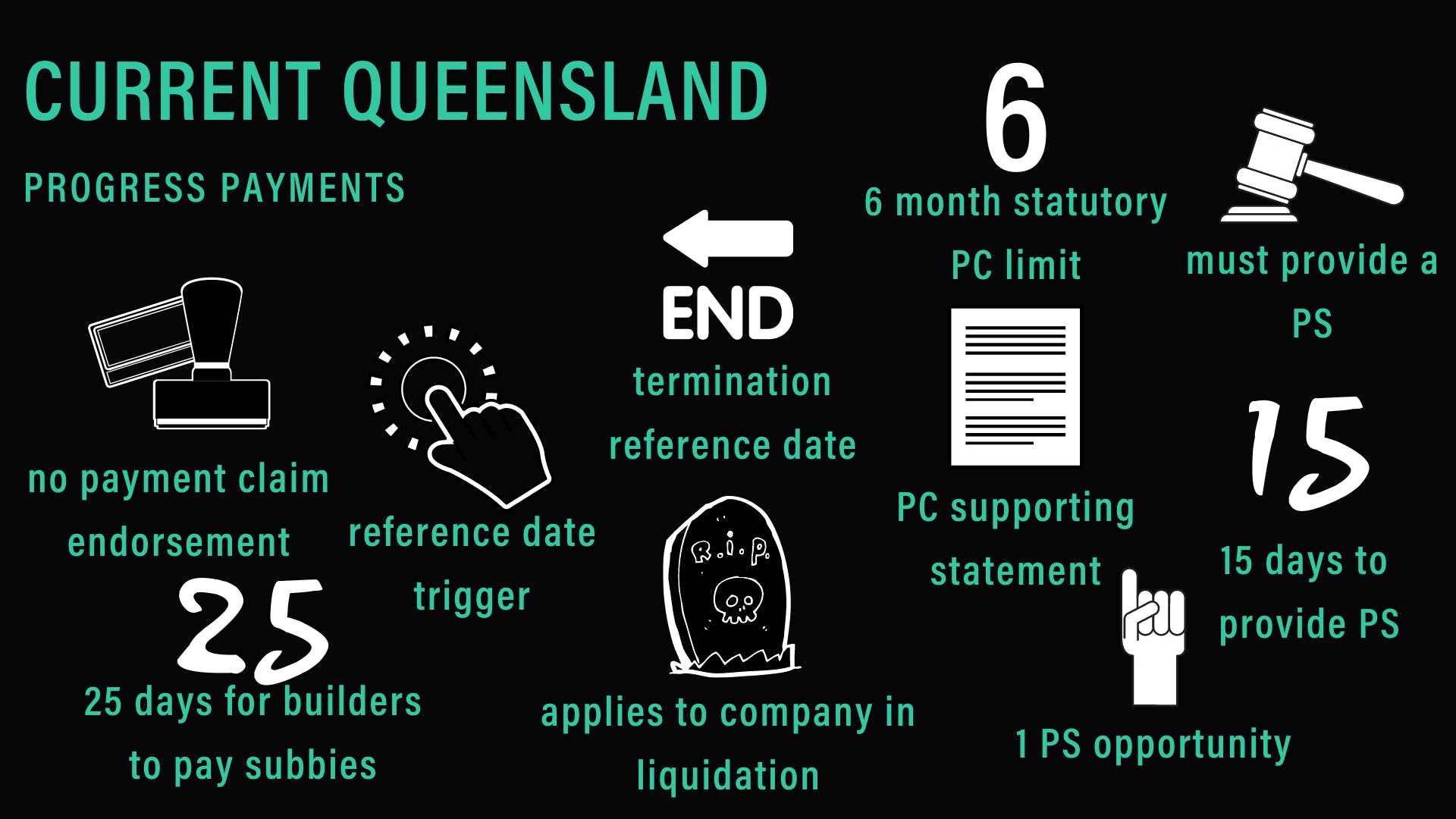 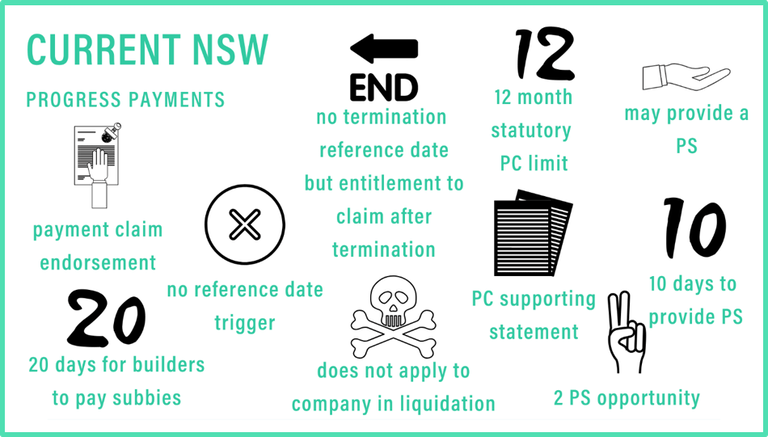 These key differences between NSW and QLD, mean that if you usually conduct work in NSW, you cannot simply kick off a project in QLD and use adjudication in the same way.

If you are a respondent contractor that works across the country with a focus on Queensland, your team will benefit from the Helix SOP Online Course. This training is designed to help you understand the SOP rules and requirements that relate to Queensland, as well as understanding the Adjudicators’ jurisdiction to adjudicate and how to identify jurisdictional errors. 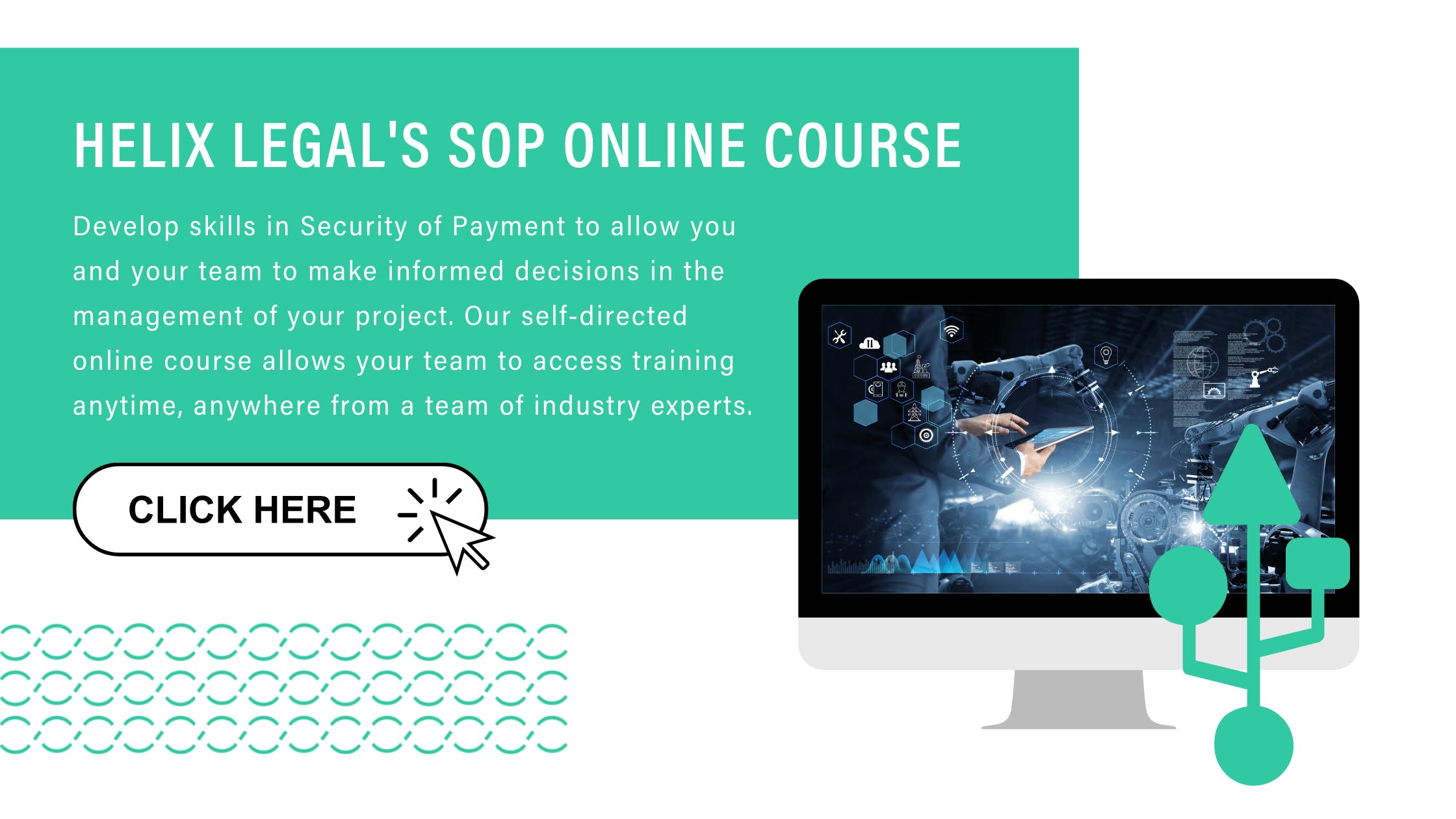 Furthermore, this video may be of assistance in dispelling a number of SOP myths.

Let us focus on uniform key timeframes under the East Coast Model.

It has been my experience that the construction industry does not readily embrace big, overnight changes. I believe that it is necessary to make the case for change and take industry participants on an incremental, clearly defined, and transformational journey.

With this in mind, I believe that through the BMF, the five states and ACT that have adopted the SOP East Coast Model, agree on uniform key timeframes regarding lodging a:

As demonstrated below, while some of these key East Coast Model key time frame differences are not all that great (not the case with the statutory period for lodging a payment claim which varies from 3 to 12 months), the fact that there are any differences at all means that contractors working in more than one jurisdiction must have different contracts and contract administration processes.

View an interactive version of the following infographics for links to the legislation. 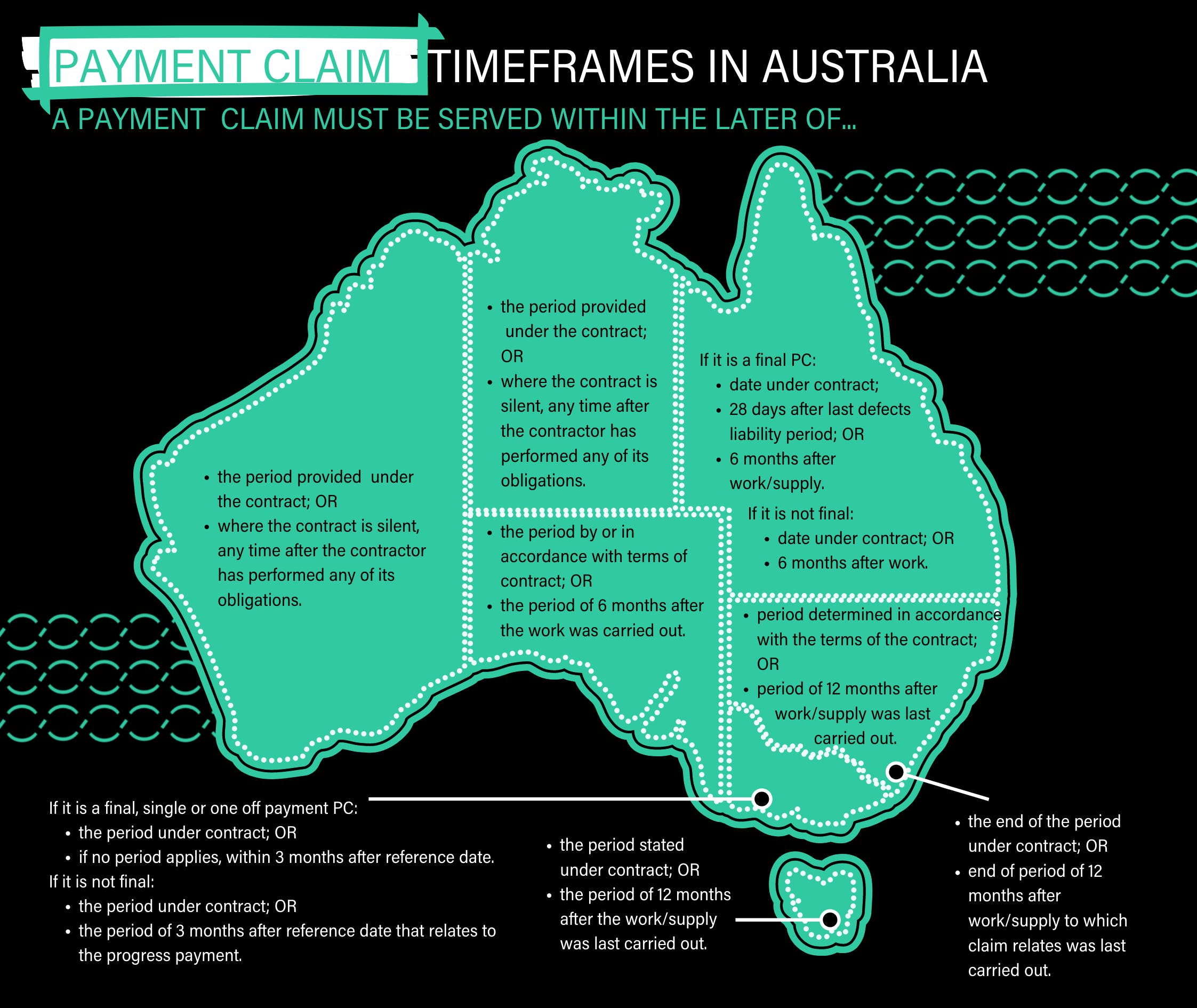 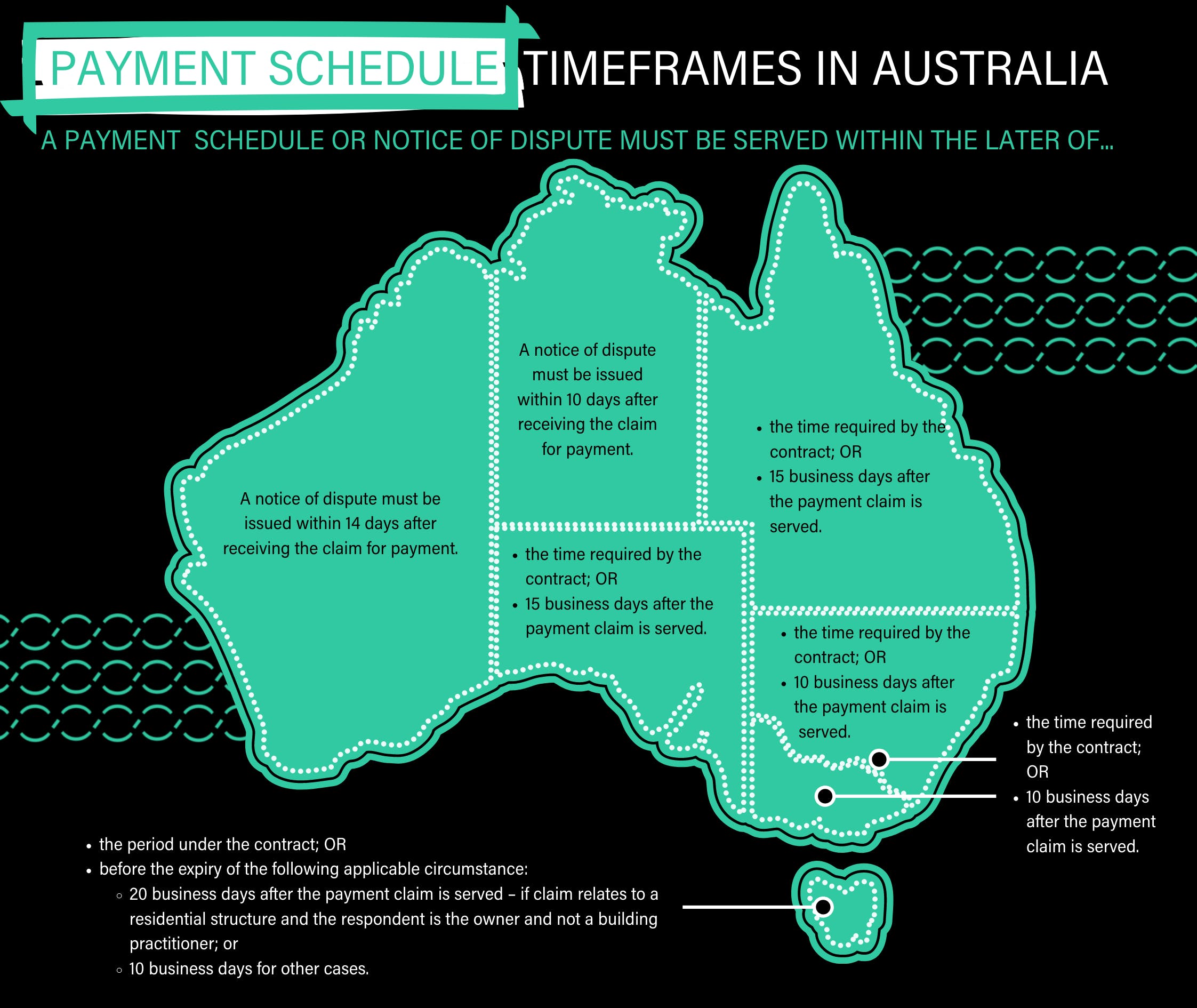 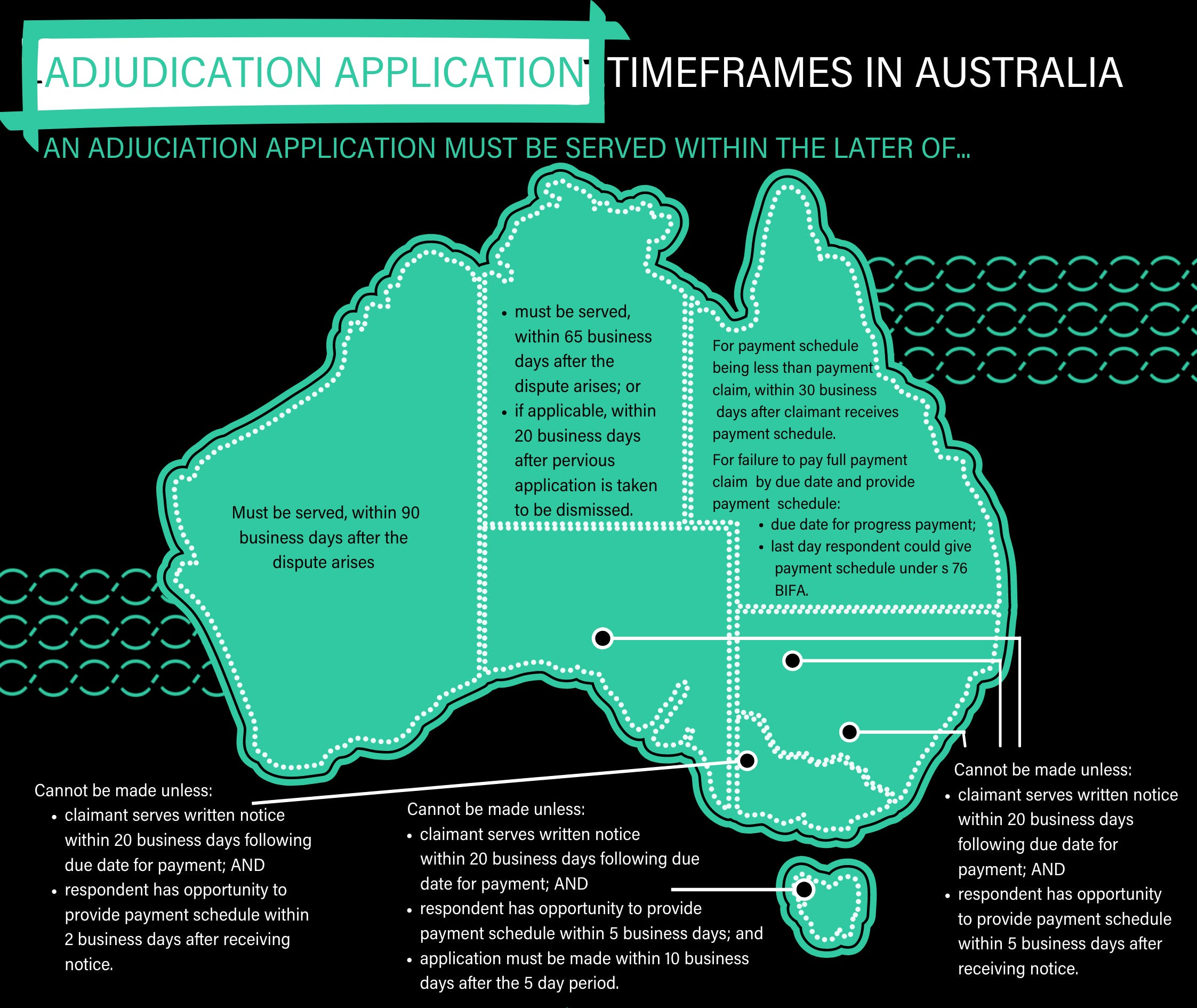 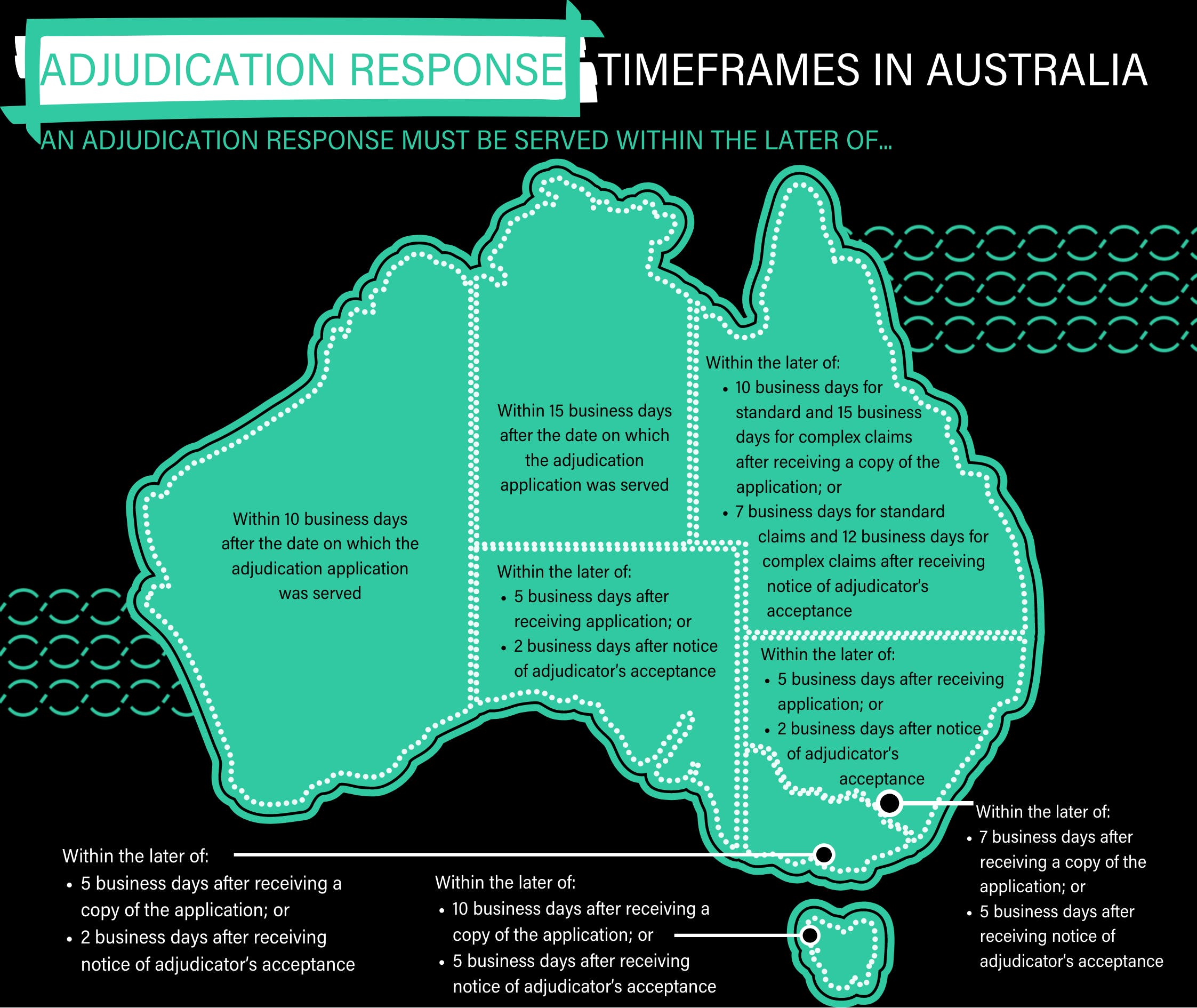 The Australian Building and Construction Commission’s Security of Payment Laws Checklist is another good resource to help identify the differences between jurisdictions.

I believe with goodwill on the part of these six jurisdictions, it should be possible for them to reach consensus on positions regarding these four key timeframes.

That would represent a good start in reducing the SOP legislative differences in these jurisdictions.

Once these changes are adopted, further legislative differences can be examined.

Incremental, targeted, well planned, well communicated, and timely actions is, in my opinion, always the best approach for addressing industry issues that require some form of government intervention.

At the risk of repeating myself, while I strongly support the concept of harmonised SOP legislation, I am a realist and I do not want to see the industry waste further valuable time campaigning for something that, in my view, has no chance of happening in the foreseeable future.

I will be interested in hearing the views of others.