Adjudication is ‘simply the best’ 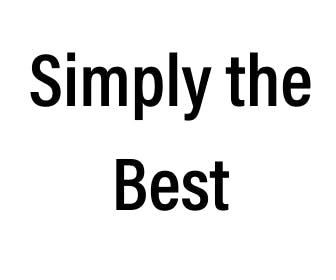 Tina Turner’s song ‘simply the best’ was used in the 1980’s as a ‘call for action’ for the great game of rugby league.

This article is my ‘call for action’ for, in my opinion, the best dispute resolution process for resolving payment disputes, being adjudication.  It is simply the best because:

With all this love for adjudication, I must also say that I do have some concerns about the current state of adjudication in Queensland.  However, I believe that if all the key stakeholders work with the government to address issues of concern, then I expect adjudication will continue to be ‘simply the best’ option for parties resolving payment disputes for the foreseeable future.

I recognise that adjudication is a divisive process because of its interim ‘pay now, argue later’ consequences. Many parties who have had decisions against them do not see adjudication in a positive light.

Adjudication is not perfect

What human decision-making process is?

A key way to make this happen is for those who have an interest in adjudication, to come together and discuss their concerns in a frank but respectful manner.

On 4 March 2020, Helix Legal is very proud to be hosting the Adjudication Registrar, Cheriden Farthing, at an event where she will provide an update on current and future adjudication initiatives, as well as discuss with attendees any issues they wish to raise.

We are looking forward to attendees being updated on such things as:

1.  The opportunity for adjudicators to be up skilled through CPD. I previously raised this issue in an article entitled The future of adjudication rests on the shoulders of adjudicators.

2.  An outline on the operations of a special adjudication advisory service provided by the QBCC. In the 2018/19 QBCC Annual Report it is stated:

“On commencement of the BIF Act, an advisory service was introduced to educate consumers about the role of the Registry and the adjudication process. With the introduction of the advisory service, stakeholders are now connected directly to Registry staff for timely information about the adjudication process. This is a service not previously available and provides support to those in disputes.”

3.  A status update on the implementation of adjudication and payment reforms contained in the  Building Industry Fairness (Security of Payment) Act 2017 (BIFA).

4.  An outline of proposed reforms of this nature as outlined in the Building Industry Fairness (Security of Payment) and Other Legislation Amendment Bill (Bill).

I have a keen interest in keeping my finger on the pulse of reform in the construction industry.  My objective in writing articles like this one is to raise awareness and generate discussion so that outcomes for the industry can be improved.  I have sat in many different roles in my career in the construction industry and one thing I know for sure is ignorance is not bliss.

I know it must feel like there is always something new for you to get across these days, but I genuinely want to be here to help.  Let’s unpack the next raft of changes you need to prepare for.

What are the KEY adjudication and payment reforms contained in the Bill? 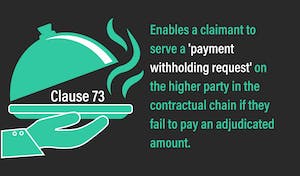 The claimant in an adjudication, who may be a subcontractor or head contractor, will have the ability to serve a payment withholding request on the higher party in the contractual chain (clause 73).  In introducing the Bill, the responsible Minister, Mick de Brenni stated:

This obligation to withhold funds only applies to the extent that an amount is payable to the respondent by the higher party. The obligation to withhold funds ends when the claimant has been paid the adjudicated amount. Money withheld under a withholding request is also subject to a charge, providing additional protection in the case of insolvency. The charge is created in favour of the claimant and is declared to be a statutory interest to which the Personal Property Securities Act 2009 applies.

Note:  This clause contains four other offence provisions in addition to the above one mentioned by the Minister.

2.  “Hey everyone, I need to be paid when this property sells” 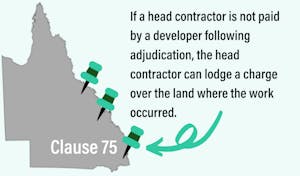 A head contractor who is the claimant in an adjudication application will have the ability to register a charge over property where an adjudicated amount has not been paid.  As stated in the Explanatory Notes:

“Clause 75 inserts new chapter 3, part 6A into the BIF Act. The new part gives a claimant for an adjudication application, who is a head contractor, the ability to have a charge registered over property where an adjudicated amount has not been paid.”

Elsewhere in the Explanatory Notes it is stated:

“New section 100D obliges the claimant to request the release of the charge when it expires under 100C occurs or the claimant has received the adjudicated amount from the respondent. The claimant meets their obligation by requesting the registrar of titles to release the charge in the appropriate form.”

A head contractor as a claimant may be liable for a maximum penalty of $13,345 if they “fail to meet this obligation as soon as practicable after the adjudicated amount is received or the charge expires.”

“This stops developers running, leaving everybody in the chain below them in the lurch until the debts are settled. The head contractor can apply to the court then to have the land sold and satisfy the debt. Additionally, the charge on land will make the head contractor a secured creditor if the developer enters insolvency or bankruptcy.” 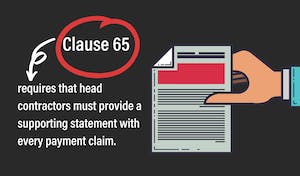 Clause 65 amends section 75 of BIFA (making a payment claim) and requires that head contractors provide a supporting statement with every payment claim.  A maximum penalty of $13,345 (100 penalty units) applies for failing to do so.  However, a failure of this nature will not affect the validity of a payment claim.  The intention is, is that the supporting statement will declare the status of payments to the subcontractors.  The explanatory notes relevant to this clause states:

“If a head contractor provides false and misleading information in a supporting statement, the commission will be able to prosecute the matter.” 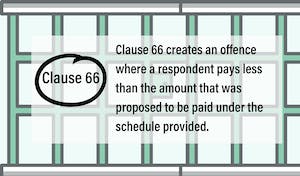 Clause 66 amends section 76 of BIFA (responding to a payment claim), creating an offence where a respondent pays less than the amount that was proposed to be paid under the schedule provided.  A maximum penalty of $13,345 (100 penalty units) applies for non-compliance.

Note: Section 76 of BIFA already contains an offence provision for a respondent who fails to provide a payment schedule (maximum penalty of $13,345 – 100 penalty points). 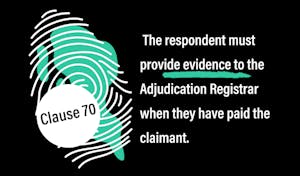 Clause 70 amends section 90 of BIFA and provides for a new requirement that the respondent provide evidence to the Adjudication Registrar when they have paid the claimant.  The notification must be made within 5 business days of making the payment.  A maximum penalty of $2,669 (20 penalty units) applies for failing to provide this information.

Note: Section 90 of BIFA now has an offence provision for failure of a respondent to pay an adjudicated amount (maximum penalty of $26,690 – 200 penalty points) 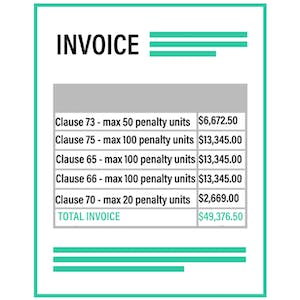 All in all, the new changes will result in a big bill from the regulator for your failings.  Can you afford this?

I will be interested in hearing from readers and those that attend our Helix Legal adjudication event as to whether they believe the payment withholding request and the ability for a head contractor to lodge a charge over property will have any impact in changing the payment culture in the industry.

A couple of things jump out to me as things that may cause these provisions not to be widely used or even have the potential to be relied on as an effective payment negotiation tool:

“Given the significant importance of these new laws to protect the industry, we have taken a firm approach to compliance rather than an educational approach. The Queensland Parliament has made it clear that these laws are to be enforced as intended. Prior to, and just after the new laws came into effect, we held a number of roadshows with industry outlining the penalties for non-compliance with payment schedule provisions.

Within the first six months of the new laws, we initiated investigations into a number of suspected contraventions of sections 76 (Responding to payment claim) and section 90 (Respondent required to pay adjudicated amount). As at June 2019, we issued two penalty infringement notices in relation to contraventions of section 76. In addition to this, six investigations involving suspected contraventions of both sections 76 and 90 were referred to our Legal Services Branch for consideration of commencing proceedings by way of complaint and summons.”

Nothing will change if no one says anything

I watch the lawyers at Helix help construction industry participants every day to navigate their payment rights and responsibilities.  I participate myself in training and education around payment and regulatory obligations, volunteer my time to speak at industry events and I read and write about reform as much as I can because I want to be part of positive change.  If you want to be part of positive change too and have some constructive contribution to make to the future of adjudication in Queensland, please come along on 4 March 2020.

We look forward to seeing you there.

If you want me to keep you up to date as these reforms progress, follow  here.